Hi all,
Hope everyone had a good weekend.
The Gators won so I won't need to see a sports therapist. At least until next week. We play LSU at home. Now I am not so confident. But if we do happen to win things will really be looking good for us.
But I keep thinking OLE MISS? OLE MISS? Did we really lose to OLE Miss at home. Then Ole Miss loses to South Carolina at home. Jerk offs couldn't look good for one additional week.

I watched a couple of movies in the plane to and from Chicago this weekend.
Not good news. I watched When in Vegas and it stunk but on the way home I watched Forgetting Sara Marshall and it was even worse.

Okay lets get right to it.
Last thing we were talking about is the poverty in Mexico. I told you about how bad the conditions are dentally. I told you about how I met this Mexican kid and got him excited about dentistry.
But this was only one aspect of the depravity in Mexico, and this is also kind of been spinning around in my head.
Everyone is poor. Now the term poor is so relative. I would say it doesn't cost that much to live in Mexico...so the same thing that would cost $100 here might be $45 there. I am talking electric, water, eggs, chicken, stuff like that.
There were so many people, I mean the houses are 200 square feet and right on top of each other. 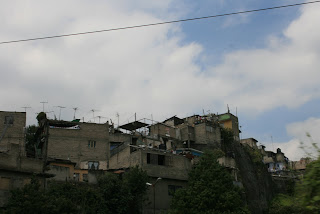 I would ask, "What do all these people do?"
Apparently the are all laborers. Farmers, landscapers, factory workers, plumbers, carpenters, framers...but minimum wage is $8 a day.
WOW!!!

Did I tell you how depressed the area was? Not depressed like emotionally but physically. In the areas I went in there was a river-like area going down the mountain. Turns out this was a open sewer line. Trash, poop, dead dogs.

Now I think about this and ask myself, "what is the problem?"
Okay, there are millions of poor people working for someone. Are the someones exploiting the poor?
Is the government getting money and not helping the people out?
We have been going down there, using our resources, for 20 years...are things better?

I come home and get pissed off when traffic is bad or when my satellite dish is not working properly. I get upset when my Fillet Mignon is not properly cooked. Or when my air conditioning at the office is not working well enough to cool our place lower than 75.
We live in the greatest country in the world and people are not happy.
What is up with this?
People in Mexico, at least in the area I was in, have almost nothing and they were dancing and singing during worship service.
Then I come home and people in the airport run over each other to get out because they have somewhere better to go.
I think it was said that 75% of the worlds people live on less that $5000 a year. Something crazy like that.
Then I would ask my assistant if she thought she was rich and she would say, "NO".
But is all perspective.
Well next to the Mexicans I was with she was not just rich but rich rich.
But that is what Americans think. They think we are the only ones around. We think the world is between California and Florida.
There really isn't even world news channels in America. How can we even compare ourselves to others if we don't even know there are others out there?
Back to my assistant. She has a house. She has a car. She goes on vacation. She has insurance. She never goes without food. In fact she never goes with out good food. To most people in the world...this is rich. But we compare ourselves to "Lifestyles of the rich and famous."
Our kids are healthy (we have the best doctors in the world) and they can go to free school. Then they can go to a University sponsored by the state.
But yet this isn't enough.

I am going to stop here.
One more Perspective and we can move on.
I will talk to you about it on Wednesday,
john

Ps It was a little warm in my house. I turned the air down. Ahhh that is nice. Life is good.
Posted by gatordmd at 10:29 AM

Great perspective. I too have gone on Mission trips and realized how blessed we are. You analysis is right on.

You talk about movies in your blog. Have you seen Fireproof yet? An awesome movie.

Thanks Mark,
Fireproof is now officially on my queue.
john