Mirror, Mirror on the Wall… 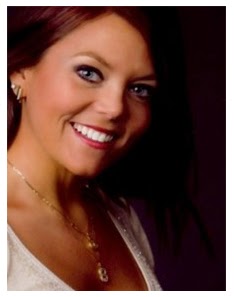 It’s that moment when you hand the mirror to your patient and she says, “Awww, I didn’t know my teeth could look pretty!” It’s a reminder why I love this career.

It started with a simple suggestion to a young, mid-20s female patient. The young lady first arrived at our office this fall with a toothache, which led to our recommendation for comprehensive care. Being highly motivated to avoid a toothache in the future, she returned for an exam. It was at that time that I simply asked, “Is there anything that you would like to change about the appearance of your teeth?”

Let me first point out that it took me a very long time to get comfortable enough to ask patients about the appearance of their teeth. Early on, I felt as though I was being intrusive by asking, “Do you like they way your teeth look?” Once I was over the personal angst of asking, it became much easier. Asking these types of questions opened a dialogue in which patients could tell me what they did or didn’t like about their teeth.

Asking the question as well as adding a complete series of extraoral photographs have improved my ability to better see what can be improved upon. I can’t believe that I practiced dentistry for so many years without consistently taking extraoral photos.

Returning to the patient of the day…she has generalized white mottling of the enamel, with the mottling being more significant and brown on the facials of teeth No. 8 and 9. 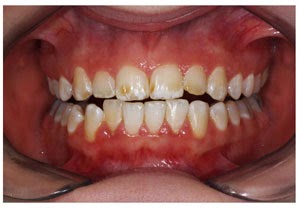 The conversation was simple: I asked if she had a desire to change the appearance of her teeth and she said she didn’t think there was anything that she could do. We discussed both direct resins and porcelain as options. She was upfront and honest and stated that she really was mostly concerned about “the brown spots”; the white “speckles” didn’t cause her much concern. At her appointment, she was still a bit confused as to how I would be able to “fix this”—pointing to her teeth and questioning whether they would look like normal teeth. We again reviewed the process and after our discussion, it became clear that much of her confusion was based on the fact that she’s only had amalgam restorations and couldn’t understand how the bonding would look normal.

After gaining her consent, we proceeded with conservative preparations and blending of many shades to mimic the appearance of the adjacent dentition. Upon final polishing and checks, I felt we had significantly improved the esthetics of this young woman’s teeth and I was confident that she would be pleased with the end result. She was ecstatic. She pulled her lip back to look at her teeth and absolutely beamed. 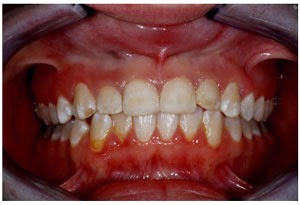 This is justification for all those days that you want to throw in the towel—those days when you have the feeling that you can “no longer do this job!” This patient exemplifies my desire to continue to learn so that I can improve my skills, my desire, and my experience to provide only the very best for all of my patients.