I can't be the only one weird stuff happens to...

Okay, it's official: I am addicted to the TV show CAKE BOSS. The kids and I watch this show all the time. It is awesome, hilarious and (usually) good, clean fun. Cake Boss is a show about a cake-maker from Hobokan, New Jersey. He and his team make specialty cakes, and it has an Italian family flair to it.

So, me and the kids were sitting around and they were making a bachlorette cake. On this cake were 5 male strippers on poles. The girls went crazy. But this led to a conversation with my oldest on what a stripper is. See, he is at the age where he has questions about everything. He is picking up on all the things people say. He is like a sponge. The other two kids saw the cake and didn't think anything of it.

So I told him what a stripper is and he was like, "So you are telling me that people take their clothes off in front of other people?"

It is amazing - Hilda and I have tried so hard to shelter our children from a lot of the world and... that's exactly what we did!

Next... I can't remember if I told you or not, but I started marathon training again.
I am signed up to do the Chicago Marathon on September 10th. As marathons go, this is an "early" one. The training starts in June so that means you only have about 3 and a half months to train. The Disney Marathon, here in Orlando, is in early February, so that is 5 additional months of training. So the miles really ramp up fast and it hasn't been going very well for me.

I haven't been able to figure out why until I drove up for my Saturday run. It was 5:30am and I was going to run 12 miles (this weekend we are supposed to run 16), and it was 80 degrees. Yes, I said that right. It was 80 degrees at 5:30am. Yesterday I ran at 5pm and it was 96 degrees. Can someone please tell me why we train for marathons in the SUMMER?

Okay enough about me. Lets talk about this patient I had once. She was a hair product rep. I don't know if you know this either, but my sister owns a hair salon.
This woman and my sister talked, and my sister referred her to me.

This woman had some of the most severely tetracycline-stained teeth I had ever seen.
We did the full work up and she was pumped and I was pumped and it was awesome. I love it when an adult is motivated and is excited about fixing their teeth.

One problem, she had terrible occlusion. It usually is not a problem. Just go to the orthodontist, get braces, get good occlusion, no problem. But it is kind of a buzzkill when you tell someone how awesome they are going to look with their new veneers and they get all excited and then you drop the bomb that it is going to take 2 years and 2 months to get it done.

They have been saving their money for a long time and they want it now. They have seen all the TV shows and they see that it can be done in about 3 days on TV. I got her to understand the intricacies of her treatment plan and whatit will means to have a balanced occlusion and how that usually means it is going to last longer. 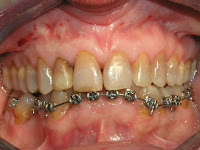 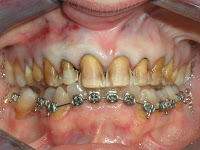 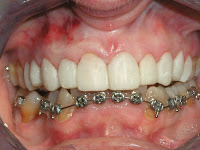 She agreed to treatment. I spoke with the orthodontist and he said he could have the upper finished in 10 months but he was going to need 2 years on the bottom. The patient I were both thrilled. 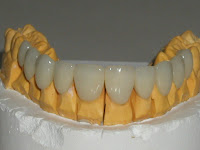 After 10 months, the maxilla was looking pretty good (brown, but good). We scheduled the prepping appointment as soon as we could. I took some photos before prepping, after prepping and I took a temp photo.

It was after the prepping appointment that things started to get weird. She would call me and tell me her teeth were really sore and ask if could I call in some pain meds. No problem. I mean, she had just had 10 teeth prepped. No red flags went up there.

Two weeks later, we cemented in the real things. She was thrilled. I was a little disappointed, but that is me. We promised to talk in a couple of weeks so I could bring her back for some photos and I could see them (sometimes I like my work a lot better the second time).

That was the last time I saw her. (I was pissed because I never got an after photo, but I hate taking an after picture on the cementation appointment because usually the tissue doesn't look that great).

About 4 months after that, she called me on a Friday. She was out of town and asked me for some pain meds because she had a tooth that was hurting because of her braces on the bottom. I was surprised to hear from her and I told her I wanted to see her. I gave her the meds, but not many.

She called me about 6 months after that looking for pain meds and I told her I wouldn't give her any pills unless she came in so I could look at her mouth. She didn't come in.

To this day, this case boggles me. I don't even think she got her braces off. The orthodontist called me and asked me if I had heard from her. I said, "No, and I was wondering the same thing of you." She just dropped off the face of the earth.

As her dentist, all I can do is think it was my fault. I wanted to think that she might not have liked the veneers so she ran. But I think we all know what happened. She had a drug problem and it finally caught up with her. She seemed to be doing fine for a long time (enough to save up $15000 for dental treatment), but relapsed.

The moral of the story is that people are people. You never really know what is going on with them. We go to these lectures, and the before and after photos look awesome. But they never show you the cases that go all wacky like this one. Why would they? But we all have them.

If you are young and have never had something wacky happen to you... you will. I have to say, of all the major treatments I start, only about 75% really finish like I want.

And even with the ones that go all the way, you never know what is going to happen afterward. Take this patient: I put in 22 units of porcelain in her mouth (her choice), but she couldn't stop eating jawbreakers (yeah, I said JAWBREAKERS) and she broke a bunch of them.

Stuff is crazy, that is all I have to say. I will tell you working with people is the best thing about my job but it is also the stuff that gives me the most gray hair.

You guys have any funny stories? I would like to hear them.

Have a great Wednesday,
john
Posted by gatordmd at 12:07 PM

Make it to the Chicago Marathon and the Snells will be there to cheer you on.