I have had a pretty good week. Pretty busy actually. Busy patient-wise and busy staff-wise.

On Wednesday, we had three hygienists because of summer and all. We open up some more hygiene days in the summer because kids are out of school and we want to be available to families with busy schedules and lots of kids.

But days with three hygienists are hard on a dentist. Wednesday I did 18 hygiene checks. I was running around like mad. Try doing your normal work load and doing a hygiene check every 30 minutes.

Now staff....The hygienist that had a baby came back this week. And we hired the hygienist that was subbing for her. We also started a new person at the front on Monday. [What was your name again?] I think this is a great crew and hope that there won't be any more changes for a long time....I am hoping like 10 years.

He said his life was very dangerous and that he always knew this lifestyle was going to catch up to him. He said he would drive his car with $50,000 in the front seat and a gun under the cash.

Well, it finally did catch up to him and he got "pinched" (oh, I know all the street verbiage. If you don't know pinched means, it means he got caught) and he went to the big house for over 3 years. Jail is where Alan told himself he was going to change. And indeed he did. He was changed by a prison minister.

When he got out, he found a church and began his new life. There was only one problem: Alan couldn't make ends meet because he had never had a real job. He didn't have any skills to get a real job.

Here in our town, some of the local churches put together something called Jobs Partnership. It is a 12 week course on job skills. This class teaches the students everything from "why you need to show up on time" to "how to put a resume together" all from a Christian perspective. And during those 12 weeks, the people that put the class together really try hard to put their students in front of perspective employees to help their students find jobs.

Well, Alan got in this class and really thrived. He finished the class and got a pretty good job. But the one thing that he felt was holding him back was his teeth. His boss wanted him to move up to a sales job, but Alan knew that he wasn't going to be able to sell anything with his smile looking like this. 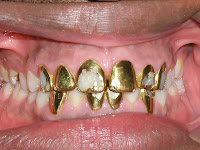 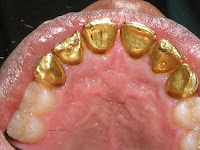 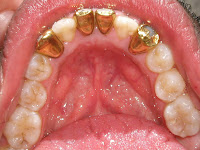 Well, the director of Jobs Partnership and I were in a Bible study together. He told me about Alan. Alan and I met. I wanted to help him, knowing full well that Alan didn't have the thousands of dollars that it would take to remove the fake gold crowns. So I called my lab guy and he agreed to help Alan. Then I called CAPTEK, whose headquarters is here in Orlando, and asked if they wanted to partner with me and my lab guy in helping Alan. Everyone agreed that Alan was special and was worth helping.

So we all agreed that we were going to help Alan. We brought him in one day and began to change his life. I removed all his fake gold crowns and made him temps. 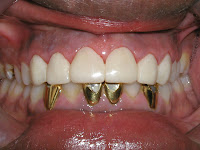 These are the temps after the first appointment.

I did a couple of composite veneers on his lower teeth along with two crowns. Then I filled all his cavities. Then I think I did some root plainings because he had never had his teeth cleaned. 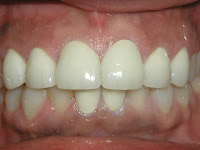 This is after he was all done.

Alan is a special guy. He made everyone smile when he came in. And you know when you spend that much time with someone, you kind of become friends. 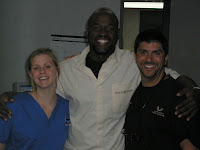 This is Alan, me and my assistant. Look at that smile!

Since his last cleaning here, Alan has become the head guy at his work. He got married (I went to the wedding. It was my first black wedding. It was quite an eye-opening experience for me. I mean with the bridesmaids dancing down the aisle. It was awesome. He left his company and started his own business. And now the story has come full circle....he is doing my carpet in my house.

Then, he spent the afternoon with me and the president of CAPTEK going into every cubicle in the office, thanking the employees personally and telling them his story and how they all played a part in helping him.

I have to tell you, Alan has an amazing story. He would tell you that transitioning to what he is now was, and still is, very difficult. But he thinks about how far he has come. I am just happy to be a part of his story and I am happy to get a friend out of it.

Hope you all have a great weekend,
John

LeBron is a punk.
Posted by AGD Blogger at 9:50 AM

He looks pretty happy in the after picture.

Hey all you dentists.. this is an open question.. not really about the current posting.

(big fan of the blog! Been reading it for years)

So i am looking for guidance on how to pay for dental school... I am leaning toward Air Force.. but have not met a dentist who took that route. (most of the dentists i asked did the navy route, and thought it wasn't worth it). Did any of you pay for school by serving in the air force? or have you heard anything positive or negative about paying that way? I am nervous of course that a normal life and my ability to start a family will be delayed another 4 years after d-school, but the money seems good and debt with this economy doesn't seem like a good idea. Thanks guys for any comments you have to offer.

Thanks for sharing this story. It's great to read about how changing a person's smile can change his or her outlook on life.

Thanks for your comments.
I am glad you all liked it.

Next couple of cases will be not so successful.

They offer loan repayment on top of a modest salary.

My dental school partner was going to do that before DentiCal shut down and erased funding. Now he's in Texas.

Nice before and after pics. It is great to see how your work can change someone's life.

Great before and after pics. This shows what cosmetic dentistry can do to tranform one's appearance.

You have to see the Dunkin Donuts blog. That was a good dentistry one too.

Amazing piece of writing via a small biography of Alan and his journey. Whole transformation of the teeth via cosmetic dentistry.