The Feet of Mr. Lincoln, The Words of Dr. King

The view of our nation’s capitol teeming with people from all parts of the world made me button-popping proud to be an American. It was the summer of 2011, and the messages just started flowing.

Our summer vacation plans were dictated by our child’s educational needs. Sound familiar? You see, he was moving to Washington, DC to pursue his graduate education. As usual, his mom wanted to okay his student housing and make sure he wasn’t going to die of malnutrition or major OSHA violations.

I had just walked from the Washington Memorial past the Vietnam Memorial, on to the reflective pool. There was no water in it as preparations for August 28 had started. That is, August 28 as in 2013, a full two years away.

When my son, Debbie and I got to the Lincoln Memorial steps, it was entrancing. We stepped into another plane where the quiet was deafening as people from all over the globe wandered the massive monument to pay homage to this great man.

My mind was racing as we approached the magnificent entryway of granite steps. And then I heard him speaking. Yes, this was the monument to Lincoln. But make no mistake; the event that took place on August 23, 1963, was in full display.

I turned to Debbie and said under my breath, “Debbie, I can actually hear MLK giving the famous March on Washington speech.”

Softly she replied, “Bob, you silly goof. Look over there. See the podium? See the speakers? Yes, they are playing the speech, loud enough to hear clearly if you are close.”

When I got to the top step, it felt like I could say hello to Abe and then sit and see what he sees as he looks over the world today. With the speech of Dr. King as the backdrop, it was easy to see the connection to the White House, not that far away.

To those of us baby boomers, there may be a yearning to think about what we have learned in the past 50 years. Surely, each one of us will have a personal story as unique as our own individuality.

If you get a chance to go to our nation’s capitol, be sure to make time to sit at the feet of Lincoln and contemplate the words of Martin. 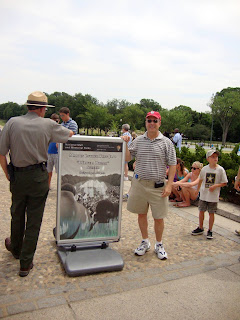