Friday. What else can you say?

I know I haven't talked about movies in awhile (not because I haven't watched any; I just thought it was making the blogs too long), but I saw one that I thought was worth talking about.

I saw the movie Precious. This was the movie about the overweight African-American girl. I thought it was going to be a pretty weak movie. You know, fat girl goes to high school and everyone makes fun of her and somehow she comes out on top at the end. But this wasn't the case at all.

I don't want to give it away (because you all are going to go right out and rent it....go ahead I will wait), but it was about a girl that grows up in deplorable conditions. The daughter of an abusive welfare mom, she is in a situation that doesn't feel very hopeful. But at the end she has risen above her situation and begins to crawl out of the dark hole she is in.

The movie is painful to watch at some points. But be warned: if you have a light stomach, maybe you should just read the book. They say the F-bomb about 1000 times in this movie (among other choice cuss words). I was moved by this movie and I think it is the best one I have seen in over a year.

Okay, where were we? Oh yeah - my friend's patient.

They were all through with the talking phase of the treatment. They were ready for the temporary phase of treatment. One thing I forgot to mention is that her son (you remember the very famous professional boxer?) had a huge fight coming up in about two weeks.
The temporary phase was going to get her looking good for the fight and get her through her HBO interviews. Then she was going to begin phase II.

The day was all set. He was fully prepared. He had already had a 10 unit bridge made from Glidewell. He had blocked off 4 hours in the morning just to be with her. She came in and was ready to go.

This is where things got interesting. The front desk person was relatively new, and they had not made payment arrangements. You know how you get so excited about the dentistry you forget about the actually getting paid for it?.... Well, that is what he did.

So when she got there they began the discussion of money. It had been talked about but what should havehappened was money should have been exchanged just to reserve that kind of time.
I think the patient had given a credit card but it wasn't her's. It was her son's credit card, and the front desk person did not want to charge money on his card without his permission.

It was a bit of an issue getting this guy to call her back. It seems with a major fight just days away, he wasn't answering his phone. So, the patient calls him from the office and drops a bunch of F-bombs at him on his voicemail and then tells him to call back.

He called back. A conversation ensued between the mom and her son that was R-rated, to say the least. Then she handed the phone to my friend and said, "He wants to talk to you."

Whoa, now wait a minute. A couple thoughts came to my friend's mind:
1) he now has to talk to a very upset man.
2) he is getting thrown in the middle
3) the guy he is going to talk to is a PROFESSIONAL BOXER who could easily kick his ass through the phone.

He composed himself, took the phone and started off very cordial, "Hey, how are you doing?"

Did you ever see the movie Guarding Tess with Nicholas Cage and Shirley McLaine? He is a secret service agent that has been assigned to guard a past president's aging wife. She is a real pill and keeps calling the president and basically tattles on him. So he gets on the phone with the president and the president proceeds to chew him out. "Do you know that I am the president of the United States of America and I have to deal with you?" This is kind of how the conversation went with my friend.

The guy starts in with, "Why am I talking to you? I don't know what the hell is going on down there, but I have a f-ing professional boxing match in f-ing 5 f-ing days. I am training basically for 24 f-ing hours straight and I am trying to get my mind right and my f-ing mother is calling me about a dental bill. Do you understand the f-ing situation I am in?"

"I looked over this bill and it is like six thousand f-ing dollars! What the f is she getting done?" My friend thought this might not be the best time to tell him that this is only the first of many phases.

Then the son started to allude to the fact that the bill was entirely too much and that his mother was being "taken" because of who HE was. My friend tried to explain to this man, who obviously had a very low dental IQ, that this is what dentistry costs. When you only have 3 teeth it costs a lot of money to fix. He finally gave his consent for the treatment, but very begrudgingly.

He started to work. The day went great. They prepped all the teeth, made all the temps, delivered the valplast, and it really looked good. 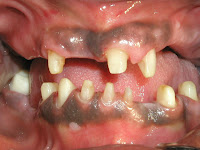 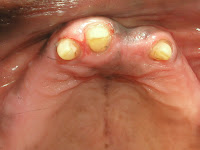 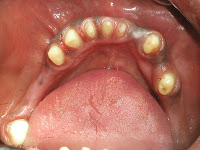 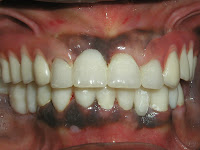 Now, I am no Frank Spear, but I think this turned out great.

She was able to go to the fight and do all her HBO interviews and, but was never happy. She loved my friend as a dentist, but the relationship was always strained. At the next appointment, she told my friend that her son had "cut her off," and that she could not go on with anymore treatment.

Obviously, after about a year the temps started to break. Knowing her situation my friend would repair her temps for free, but after awhil,e had to sit her down and talk. He reminded her of their discussion awhile back about how this was TEMPORARY and it was not meant for a permanent fix. She understood and he went on to tell her that from now on, he was going to have to charge her to repair her temps.

This is where is really got hairy.

She moved away and started to go to her son's dentist. Then the calls started. And they were nasty. "My new dentist said you ripped me off."

And once that started, my friend wanted no part of a verbal confrontation. He avoided her calls. She eventually faded away.

There is so much to take away from something like this. I think over the next couple of weeks, I am going to tell you a bunch of stories of things that happened to my friends that I think happen to all of us.

I guess his front desk person could have gotten some money up front. And, like our guest blogger said, maybe my friend could have had the patient sign a piece of paper saying she understood what temporaries are and that she understood the staging process.

But you know, things just happen. People get motivated then they get unmotivated real fast and it is out of the control of the dentist. You try and try to raise the dental IQ of the patient, but how can you really do that? How do you help the patient make a life change in a couple of weeks?
My friend couldn't. I don't know if anyone can.

Have a great weekend. Let me know if you have seen Precious, and if you haven't, go get it!

john
Posted by gatordmd at 6:46 AM

Temporaries are not supposed to look too nice. And yes a consent for temporaries should have been signed. Plus your friend broke the cardinal rule and assumed somethings he did not know. Like the son would pay for it. Patients need simply to understand what you say. They do not need their dental IQ raised because that is not possible most of the time.

I can't believe there's such teeth! Glad the patient can now smile! :)