I may just be the greatest dentist in the history of… well… dentistry. Should G.V. Black be so bold as to gaze upon my Class II cavity preparations, he had better be ready to take notes.

How do I know about my greatness? It’simple. I just received something in the mail that informed me of my prestige. Much like the Internet, if you receive something via the United States Postal Service, it must be true!

It all started when I received an envelope from an official sounding company (I won’t use their name here). Upon opening the envelope, I was informed that a research council is proud PROUD to name me one of America’s Top Dentists. Imagine, a Research Council! It took an entire group of people to evaluate me. Of course, no one visited my office or interviewed me or any of my patients. But, my greatness must have excluded me from such formalities. 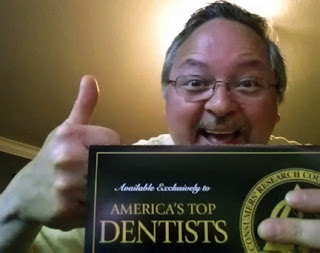 Have you received such a mailing? Who am I kidding? Of course you haven’t. Is that a halo over my head?

Not since Who’s Who learned about my talents have I been so honored. Imagine how proud I was to be listed in their book for only a small fee. Before long, Who’s Who in Medicine came knocking. Then, Who’s Who in Business. Will the accolades never end?!

Upon further reading, I came across the Council’s criteria. They award points for education (apparently most dentists don’t have one), years in practice (take that, young graduates), and affiliations with professional organizations (those AGD dues are really paying off now). That’s it.

How can anyone ever deny my place in dental history? I’m already in talks with the folks over at Mt. Rushmore. 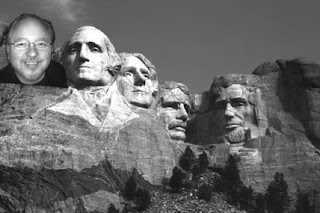 I thought there must be some way for patients to learn of such an accomplishment. When you win at the Olympic Games, they give you a very nice necklace. When you make the best film of the year, they hand you a paperweight named Oscar. Surely, being named as one of the nation’s top dentists deserves something. Just as I pondered this, I saw that I was in luck. The company that mailed me the envelope would be kind enough to send me a plaque or trophy with my name on it. Of course, I’d have to pay for it, but I’m sure that is just a minor detail.

Should I get the trophy or plaque? It’s not like you can just go out and have one made yourself.

Apparently greatness is contagious. I just happened to visit my optometrist and guess what? Right there on her wall is a plaque that states that she is one of the nation’s Top Optometrists! At my annual physical, I noticed that my physician was one of America’s Top Doctors! I am definitely a good influence on those around me. Imagine having all of the top docs in the world within two miles of my house. Who else could possibly make such a claim?

Well, if you’ll excuse me, I need to go find a spot for that trophy.

Andy Alas, DDS
Posted by AGD Blogger at 8:16 AM

Hey, congrats! Welcome to the club! Of course, I was invited within two months of graduating, and hadn't even worked in a clinic outside of school yet. They thought I was THAT good!