Well, that was fun. I just got finished doing a MODBL composite on tooth number 14. I went through half of a syringe of caries indicator, about 3 mm of liner for the "near exposure", and 3 compules of composite. Thank heavens for a dead soft band, because I don't think I could have ever established my mesial and distal contacts without it. Why did I do that? Because the patient asked me to try it. I am affectionately known as "the can opener" at work. I can open up a can of worms faster that you can say the word. I will spend a whole blog on my most famous "can opener" moments at a later date.

We just returned from yet another volleyball tournament. This time it was in Tampa, Florida. Let me back up a few months. Sometime in October of last year, my youngest daughter, who is now 16, asked us if she could try out for the travel volleyball team for the county. Not knowing at all what that entailed, we agreed. Later that next month, she tried out for the team and made it. Now, here is the deal. The fee for being on the team is about $1,500, which doesn't include shoes and knee pads (that is about another $130).

When they say travel, they mean travel. Basically, every Friday-Sunday (and sometimes half a day Thursday), from January to May, we have to travel to a different city and sometimes a different state to play in a volleyball tournament. That means, hotel, food, and travel for 3 or 4 days every weekend for almost 6 months! Oh, and we have to pay to watch the games which is about $12-18 a weekend, each. On top of that, there is practice 3-4 days a week for 2 hours at a time. These people are serious about volleyball. After watching them practice and play these last few months, I am really starting to appreciate the value in something like this. The girls are doing better in school, they are learning about teamwork and cooperation, and they are becoming skilled in a very demanding physical sport.

This weekend was Tampa, which is about a 2 hour drive from where we live. The venues change from city to city. This time it was in the convention center. I have never seen so many people playing volleyball. There were 25 courts set up, and the games were going on all at the same time. Supposedly when we go to Atlanta later this month, there will be 180 courts! I can't even imagine that. We even have the packing routine down to a science, which includes ibuprofen for the 25 ref whistles (all blowing at the same time) and an antacid for some of the fast food we have to eat.

This has been my developing thought on this. Your kids grow up fast. It seems like yesterday when my daughter was born, and now she is driving! I always treasure the time I get to spend with any of my kids, because I know one day they will be few and far between. I must admit, when I realized the cost involved in this whole thing, it sort of made me wonder if it is worth it. After these last few months, here is what I came up with.

Volleyball fees: ~$1650
Hotel rooms, food, and gas: ~$3000
Lost revenue being away from work: ~$12,000
Watching your daughter score the winning point in a championship match: Priceless 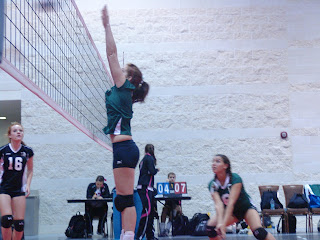 Have a great week.
Scott

Scott A Jackson, DMD, MAGD
Posted by AGD Blogger at 9:34 AM

Sometimes I think we let the kids compete more for ourselves than for them. We just talk ourselves into saying it really for them. I know how you feel. Last year we spent what you did on one tournament out of the country. Luckily a world championship gold medal was the result. But was it worth it? Maybe, if the medal was real gold. The one thing parents will spend money on, is sports for the kids. I wanted my kid to have the opportunity to be world champion so I spent the money and luckily we now have a kid that is a now a world champion. But no really cares but us. LOL

Maybe they will care enough to put us in a better "home" when we are 90. ha