Not much going on on the home front, so I will get right to it.

I have this guy in my study club. I like this guy; he seems to be a good guy and I think he loves dentistry. [As an aside, this is the dentist I migrate toward - the guy that likes our profession.] There are still guys in the group that could give a s@#$%t about teeth but come for the social aspect of the study club. I get not wanting to talk about work all the time, but we are there to talk teeth.

This guy is pretty with it. He is my age and is a family guy as well. He was the first guy that I knew that had computers installed in all his operatories, and he installed them himself. I was like, "WHAT?!!!"

He said, "Yeah, I just installed some CAT V wire all through the office. I also put a wireless router in and hooked it all up to my server. But I had to by a 4533 giga watt ram something or other blah blah blah."

But that is just the beginning. He was the first one with a phone that he could pull up his office x-rays on. Not a big deal now, but this was 5 years ago. Okay, so he is computer geek. But see, he really isn't a geek kind of guy. He races his car (that he does all the mechanics on)on the weekends. He is a father of 3 and he has tickets to the Gator Football games. He is always two steps ahead of me (okay, maybe four) on everything with dental stuff. I look forward to seeing him because I get to learn what is hot in his office.

But the thing with this guy is that it never stops. He told me that he was using the Paraject (if you don't remember, this is the interligament injection system). For lower molars, you put the needle in the sulcus and shoot and almost all the time you get ONE tooth numb. It is perfect for lower molars that you are just doing a 20 minute procedure on.

Anyway, it took me awhile to do my research on this thing. Then I bought it. I slowly started to implement it in my practice, and now I love it. I use it all the time. This took a couple of months.

I finally went back to a study club that this guy was at and I told him how much I was loving this Paraject system. He said, "Oh, I don't use that anymore. I am using the X system now." I was squished like a grape.

I talk to my other friends in the group, and they all feel the same way, like they can't keep up with this guy. He is like a walking encyclopedia. He knows everything about everything. About teeth and about cars, about computers, and everything else. We all finish talking to him and just shake our heads.

So you are thinking, "Sure, he is good at computers. So what? He probably isn't that good of a dentist." I've got bad news for you. We use the same lab and when I go to my lab to talk to my ceramist, I always pick up some models and check out my competition. I see his work and it always really good. Damn this guy.

How nice would it be to to have a computer, have computer problems, and not get to upset? You just stay a couple minutes after work and do a quick diagnostic. Then you realize you are having a problem with the motherboard. You run up to CompUSA, buy the part, and then come back and open up the server and install the new motherboard. Problem solved. Then, on your way home you notice a shimmy in the car. Well, get the thing you lay on backwards and roll up under the car. Of course, you have all the right tools and you fix the shimmy right then and there. "I'm going to need some pliers and some 30 weight ball bearings. It's all ball bearings nowadays."

He probably has huge muscles.

Goes home and mows the grass without a shirt and smokes Marlboro reds and wears a cowboy hat. And he probably has a gorgeous wife and a huge house. And, of course, all the kids get straight As.

Next you're going to tell me he went to Butler for his undergrad studies. Son of a... Butler... 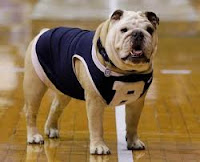 Now to me, this would be so boring. I mean, who wants all that? He probably isn't happy. Right? That is what I am going with.

Do you have this guy in your study club? Did you have him as a classmate? Tell me he isn't one of a kind.

Have a great weekend. I am not watching the Final Four. I don't care. I really don't. Just please don't let Kentucky win. Please God, I beg you.

Have great weekend.
john
Posted by AGD Blogger at 9:23 AM

Funny... I am that guy! Maybe not in all aspects but I am also a decent dentist, mechanically and computer inclined, ect...I am the tech guy in our offices.
Its called a hobby John - like your running. This guy probably spends the same amount of time you spend on your running and church activities on his 'projects' Don't try to keep up; just learn from his victories and mistakes. You don't need the shiniest doohickey in the club, you just need the one that works best in your hands and produces consistently good results. I have seen your work in your photos, you are a great dentist. Keep up the good work and don't feel intimidated by this guy - he just uses his non office time in a different manner than you.
KenJ

You are dead on with a post like this. But the ironic thing is...YOU are this guy to ME! We are in different industries but I'm always asking my wife..."How does he run, own a business, raise 4 kids, coach all the sports, blog all the time, serve at church, go to all the Gator games, watch all the movies, read all the books, attend all the social events, mow the yard, shop for bargain deals on plants for the yard and grills for the back patio" and still appear to maintain his sanity?

Ken,
Do you have washboard abs?

Dr. Ethan,
Don't try to do this at home...I am a professional, I make it look easy.

Have a great weekend.
john

The thing you lay on backwards and roll up under the car is called a car trolley. (hey, I help where I can)
And just like Dr. Ethan said, you are that guy! How many guys do you know who can pull of an annual “free dental day” like you? Honestly, we all read your blog to try to keep up with you!
Deb

I'm in John's study club and know who he is talking about. Most of what he says is true except the is no way the subject of this blog has those abs.
Btw, the subject of the blog is a great dentist but kills me with his velscope obsession.