Ramblings about football and of course Tim Tebow

Can you smell that? Ahh the sweet sweet aroma of college football.

Oh my gosh are you guys sick of hearing about the Gators and Tim Tebow yet? Because I am not.

Football has a way of taking all these issues of your life and making them better...at least for me (and basketball, too). But now that EVERY paper and television network and every internet site is talking about the GATORS everyday and all day. I can see how it can get too much.

But you have to admit Tim Tebow is a special individual. I mean half of the articles on Tim Tebow are not about football. They are about a man who is living right.

A man getting up 2 hours before practice and running through drills with his wide receivers. A man working hard to win the prize.

And I am not talking about him spreading the Gospel but I am talking about a dude that has a platform and he is using it to spread good.

Look at all the things you see in the media about meathead football players... Pacman Jones, Plaxico Burress, Leonard Little, Donte Stallworth...just to name a few.

I know there are a lot of good things going on behind the scenes in NFL players lives that is exceptional but the media doesn't report it.

I know a lot of NFL players are spending a lot of time and money and there is no coverage at all about it.

To their credit ESPN does do feel-good stories. I will digress, I have to tell you about this one. A kid, when he was 10 years old lost both his legs by slipping on a railroad track and the train ran over them. So the story was about how he and his best friend grew up in the projects of some Midwest town. Now after he lost his legs his best friend carried him where ever he needed to go. I mean the kid used a wheelchair but everywhere it was hard to get the chair his friend would carry him. One small problem, even without his legs he was still a little over 175 pounds. And, oh yeah, his friend that was carrying him all around was legally BLIND. Now how it got onto ESPN is that they both were high school wrestlers. And the story goes on to show about deep friendship, overcoming hardships and personal success. Then the article ends with this guy using his new legs to walk his graduation. OMgosh was I bawling watching the clip on the computer. I looked it up...you gotta see it.

Where was I? Oh yeah, no coverage for the good things that go on in sports figures lives. But for the bad....God forbid someone takes steroids. New flash, athletes takes steroids. Now let’s talk about it for a week. News flash....actors are crazy, people are crazy.

I don't know why the media has to play 24 hours of Cassie Anthony and Anna Nicole Smith. I can't stand stuff like this. Like the real news stops so we can cover the crazy "stars".

Don't even get me started on Britney Spears, Madonna and John and Kate.

So when a guy like Tebow comes around and get us talking about doing good in this world, kind of like paying it forward, and the media jumps all over this...I say great, I say finally.

I am not excited because he is a Gator (but it is nice) and it is not because he has the possibility of winning 2 Heisman's and 3 National Championships (are you getting goose bumps, too?), it is because football is not the only thing this young man is about.

With football and all the sh#!#%%^t he does, and he is still graduating early for crying out loud. I got to think he had a lot more to do outside of the classroom than I did and I didn't even graduate on time.

I think it is kind of funny how much is written about this guy. I mean between the Tebowisms and the GQ articles. 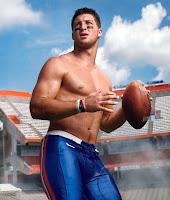 But in a world that loves to hate people that succeed (just like I hate Charlie Ward and Nick Saban), I think people have a really hard time not respecting Tim (oh yeah we are on a first name basis). People hate Tim Tebow for the coverage but they have to respect the guy that loves his enemies, feeds the poor, visits the prisoners, and heals the sick.

Because we all know this is what success looks like. It is not the money and the fame (if you don't believe watch ESPN when they do a series on athletes living under bridges) it is about what you do with your stage.

We all get pissed when we hear things like athletes "holding out". For you nonsports people, this is when a team drafts an individual and they sign a contract for a ridiculous amount of money. Well three years later he is no longer the highest paid player at his position. Now he will not play if the team doesn't pay him more. Or a kid like Michael Crabtree that was drafted out of college and has never played a down in the NFL and won't play until he gets paid a ridiculous amount of money.

I am sorry to get all sappy but success is how you use the "talents" God gave you.

I am talking athletic ability. I am talking teeth skills. I am talking about if you are a lawn mower, a plumber, an electrician, a lawyer, a radiologist (shout out to Connie), a teacher, a youth director, a school administrator, a mom...

Are you successful? Are you using your talents?

Are you making this world better? 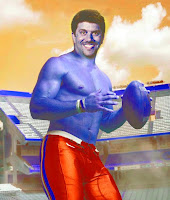 Man can you smell it? Yeah that is football.

Have a great Wednesday,


P.S. The AGD has found a dentist to help out blogging. You all know I have been really struggling with the time it takes to blog. I love doing it but I don't want to do it on my day off, because this is family time. So I asked the staff at the AGD to help me on Mondays and I think they have found a dentist that fits really well.

His name is Dr. Ric Crowder. His first blog is going to be on Monday, so let us all try to read it and try to be real nice to him (at least at the beginning). I am looking forward to reading someone else's perspective on things. Welcome aboard Ric!

wait, did you actually just refer to Tebow with the words "heals the sick"? WOW.

i do agree that he is an amazing player and seems to have an amazing heart. but i'm beginning to think that this season we'll start thinking of him the same way that we think of payton manning on commercials or our president making another appearance on television, "oh, him again."

hopefully he'll try saying "no" to interviews sometime in the near future.

it may be in his failure or (heaven forbid) the failure of his team (please check dr. john's pulse) that we see his character. he has helped create, this year, the biggest stage on which to perform. we saw the true lebron james walk off the court after failing, maybe we'll get to see the true tebow. i think it's possible in failure...or even in the undefeated season he hopes to deliver (now dr. john is back!).

did you know his parents were missionaries?

(yes, i did see the press conference last year after ole miss, thank you. that was just one game...midseason.)

After the Ole' Miss loss I was very sick. Then Tim Tebow began to heal me over the next 8 weeks.
And after our win over Oklahoma I was totally healed.

And I heard he does surgery and circumcisions in the Philippines.
Did you know that his parents are missionaries?

Peace out bro.
Your points are right on.
john

i know this might be foreign to you as a dentist, but no man in their right mind would consider a circumcision as "healing".

(i'm so ashamed, especially after this: http://sports.espn.go.com/ncf/news/story?id=4439517 - maybe they'll get rid of him after another horrible season...i'm just saying)

I think what you meant to say was that Tim Tebow is the John Gammichia of football. Least that's how I see it!

or like the GQ headline, maybe "Tebow has a Gammichia complex."

A good friend of ours (Phil) started at UF this summer and was eating lunch in one of the dining halls. Tim walked in, got his plate, and asked if he could sit down at the long, community table where Phil was eating. Of course, Phil said he could. Tim introduced himself, as "Hi, I'm Tim," and Phil said, "Hi, I'm Phil, and of course I know who you are." Tim went on to talk with Phil about school, where he was from, etc. and very little about football, except when Phil asked him specific questions. There was no "horn blowing" and Phil said he was one of the nicest people he had ever met.

As an FSU fan (ha!) I don't walk around talking up the Gators. But football aside, Tim is an exception. He is a class act, and a fine person. We need more Tim Tebow's in this world, and not for the football records.

PS - I can smell College Football in the air! It has arrived!

I am definitely not a fan of the Gators, but I do have to admit that I root for Tim Tebow, because by all indications he seems to be not only a great football player but also a rold model to many kids. Keep up the good work Tim!