On Sunday the Kansas City Chiefs "played" the Philadelphia Eagles (if you saw even a moment of the game you know why the word is in quotes), at the same time the Kansas City Royals hosted the Minnesota Twins (if Greinke doesn't win the Cy Young he is robbed - there is not a better pitcher on a worse team anywhere). I don't mention this to give you your "bad teams update of the week". Rather I bring it up to provide evidence that God has a sense of humor. See this was the last game at home for the Royals this season and they had planned a "Dog day at the 'K'". Michael Vick is suiting up for his first NFL game in 30 months against the Chiefs and the Royals are hosting a fundraiser for dog rescue shelters - you can't make this stuff up. 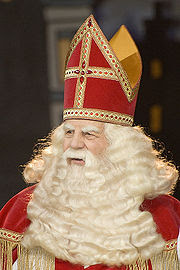 e today that I am Santa Claus. I'm sure her 8-year-old brother had nothing to do with it. That said, here's a picture of Santa Claus that makes me believe in the miracle of cryogenics. And not to be a fashionista, but come-on, is the hat really necessary, it only accents the eyebrows - although it is slimming (makes you taller). On second thought, I may have to try that hat out.

Last week Susan was out of town at a meeting and so I got the privilege of spending the week with the kids. I say that without an ounce of sarcasm - we had a blast. Brought a mattress down from one of the bedrooms, put it on my bedroom floor and had a week-long slumber party. I'm sure their teachers at school didn't appreciate it but it was fun for me. That said, I am glad she is back now (I managed to execute a perfect airport pickup), and I have a new appreciation for single-parents. I am very blessed to have a spouse to share in the children duties.
If you want to have a nice example of how insignificant we are in the universe look here. That is the kind of stuff that just amazes me. We think we are so powerful and yet the very height of our technological advancement is but a speck in comparison to all of God's creation.

Do we have any other business owners in the audience? Remember when I first mentioned the manic-depression. I am pretty sure mine is based around the monthly bills cycle. My office is 3 years old and I started it from scratch. We are growing well but are still in what I would call the "hand-to-mouth" phase of the business, and I tend to get a wee bit stressed near the end of the month. What is it that drives us to be small-business owners: sleepless nights, last minute bill payments, the fear of one bad week. But I still wouldn't change a thing. Have you ever tried to explain why we do what we do - we sound like crazy people. Who needs this kind of stress??

OK, enough of the depressing stuff. I'll try to keep that to myself and I'll leave the dental advancement stuff to John. I'll continue the "Single Ladies" theme with a great video that will make you smile.

The voices are a little preoccupied with the bank loan payment due Thursday, so I am going to put them to bed now. Have a great week.