Hi all,
I am sitting here at my desk at 7am and I am like a tooth drilling zombie.
The Magic vs. Cavaliers series is on so late. The normal game is ending at 11:45, but last night the game went into overtime.
It was all worth it because the Magic won. Holy crap Lebron is good.
I almost had a heart attack last night. Did you see it?
So the game ends at 12:15am and you are so jacked up you can't sleep. 1am rolls around and you are still sitting up in your bed going over everything.
Anyway I have to tell you about this book. It is called The Glass Castle by Jeannette Walls. This book was phenomenal. I can't say enough about it. If you are a reader you have to get this book. This was the memoirs of a young woman and her journey through her life. What makes her life so interesting is that she grew up very poor. This woman is a correspondent for MSNBC now. But like for instance her family, 2 parents and three brothers and sisters are living in a two bedroom home (about 800 square feet) with no electricity or plumbing and the roof leaked into the bedrooms (so much that the kids slept under blow up rafts so the water wouldn't drip on them). One day they came into some money so they went and bought a whole ham. They were eating off this ham as long as they could. But with no electricity it was a matter of time before it went bad. So a couple of days later she was about to eat a piece and there were maggots on the ham. She told her mom and her mom said, "just wipe them off and don't be so picky."
Dad was an alcoholic and mom sounded very bipolar.
So it was more and more incredible stories of triumph and patheticness (if that is a word). I found myself in the bathroom reading, after everyone had gone to bed, in order not to wake anyone.
Did I tell you the Magic are up 3-1 on the Cavs? And I WITNESSed it.
I almost forgot to tell you about my PeriOptic LED light. Well it does take a bit of getting use to because it is a LED. You know the fancy cars have those LED lights for headlights, it is just a different light. The over head light I have is like a yellow light and this PeriOpix is a WHITE light. At the highest setting it is so bright it almost voids all color. But you can turn it down and it really is great. It is a bit pricey $900 and especially in this economy (aren't you just sick of hearing that, "well in this economy"?) you have to really micromanage your spending.
So it is hard to enjoy something because you are so concerned with spending. So that being said I am very happy with my decision to get this light. It is exactly what I wanted.
I can see better. I see things I wouldn't normally see and this is good.
And I don't look like too big of a geek. It is small and lite and is so easy to get use to. From the first day, it was never a bother as far as the belt clip. When I got the light it came with two uncharged batteries. I plugged in the battery that came with it and it worked. I used it for over two weeks. So the batteries are awesome.
Confession #1,
Okay, I am going to confess to you a couple more things. I don't know if I have told you this but I don't use amalgam. I know, I know some of you want to strangle me but I just don't. It has nothing to do with the product. I trust it. I believe in it but I just don't use it. I have chosen, about 14 years ago, that I would not carry it in the office any more. So I have just chosen to try to do one thing and get really good at that.
I don't do dentures. That doesn't mean I don't think some people don't need dentures. I just do do them.
I am not afraid of mercury or anything like that I have just steered my office in this direction. I still see some instances that I would say out loud, "this would be the perfect filling for amalgam." You know on that distal buccal cavity that is impossible to see and can't be isolated. Now I don't say that often but I still say it (less than once a year).
Confession #2
Sometimes I don't put dovetails in interproximal fillings. You know the small interproximal decay you see on a 14 year old. You can't see it in the patients mouth during the exam but you see it in the xray. You know it is contained and just right there. I trust my bonding material (SE Bond, and Optibond Fl) to hold. I am not using the prep to retain the filling any more. I took some photos so you can see what I am talking about. 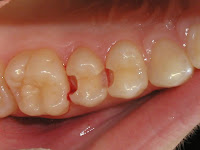 Young kid. Just a couple of cavities I found on the xrays. Simple prep....no dovetail. 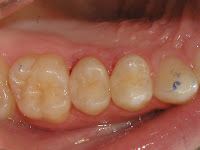 Now if this was your mouth, wouldn't you want this done to you. Real nice.
I can't think of anything else I need to confess to you.
This has really been cleansing for me. Thank you for listening.
Have a great Wednesday,
john
Ps I just booked my flight for the AGD annual meeting.
It is July 8th to 12th in BaltiMORE.
I am going to see a bunch of dental school classmates up there. We are all planning on going to an Orioles game on Friday night. If you are going the meeting by yourself and need someone to hang with....we are your dudes. Let me know.
I haven't signed up for any classes yet. I will let you know.
Posted by gatordmd at 6:02 AM

Tell me we can at least get lunch while you're up here. Or I might crash the baseball game. That's right, Debby and all the Dentists..... that might be scary.

Your pictures are really awesome. At least to this non-dentist!