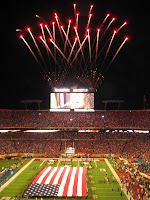 I know what you're thinking, "Oh my gosh, John is at that game."
and you are also probably thinking, "He is totally going to write about the game on his blog."
So you knew that this blog was coming.
I mean, how can you think about dentistry at a time like this.
I HAVE to write on the National Championship Game.
So here is my story.
The game was at 8pm.
My friend shows up at our house at 7:30am.
We load up the car with chairs, food, drinks, a little hibachi grill, coals, and cigars. We got the tickets and money (what else do you need).
So here is the plan. Go and tailgate, go to the game, then the six of us would go to my wife's aunt's house after the game and sleep. I have no idea where she lives but I know it is Miami. I have already called her and set it up. She has graciously agreed.
We got to the game at about noon. Perfect. We parked three spaces from the gate in the parking lot. So we are thinking ahead to the mass exodus after the game. Perfect. This lot was across the street from the stadium. About 200 yards.
We set up camp. 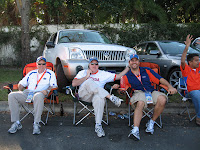 We had a couple of people meet us there so our group was about 11. We threw the football. We people watched. We told stories about old football games. We drank and smoked cigars (kids don't try this at home, I am a professional).
At about 1:30 two people in the group went on a recon mission to see if there was anything to do around the stadium. They returned with no merchandise and with word that there wasn't much to do. So we stayed. At about 2:30 we fired up the grill and had burgers.
We knew we would leave toward the stadium at about 6pm. So then more stories and more football.
We met new people that were walking by our little camp site.
I don't know why this happens, but these kind of events just really brings out some weird people.
6pm comes and it is time to move. We pack up the car and start our decent to the stadium. It is total chaos. People are drunk out of their minds. Some on excitement and some on booze.
Ticket scalping was everywhere. So for someone who has tickets it is nice to find out how it could of been. I ask people that are looking for tickets how much they are willing to spend... and I got alot of "no more than $300".
Then I start asking people with tickets, "how much are you selling them for?" And they would say, "1". So I guess in scalping lingo...that is $1000. ONE THOUSAND DOLLARS!
This is some recession we are in.
So we get in the stadium at about 7pm.
It is a beautiful site. 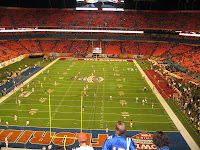 This stadium was awesome. As you can see by the picture we are almost in the center of the end zone and you can see everything. The field was in perfect condition. If you look across the field, up top they have a 90 foot jumbo-tron on both sides of the stadium, IN HIGH DEFINITION. It was awesome.
We start to see a lot of people we know. A lot of nervous energy filled the stadium.
The game, as you may know was a real nail biter.
I have one observation about the game. People can not hold their liquor. I being the responsible drinker stopped drinking at about 6pm. But I guess some people did not have an "off" switch.
At Florida Field they don't sell alcohol but here they did. When I tell you there was some people that were wasted, this would be an understatement.
I am talking like people my father's age that couldn't make it up the stairs. The best is when they are holding two full beers and they fall down because they are too drunk to walk up the stairs. More than once did people walk all the way up to my row (17) and realize they were in the wrong section.
The people directly behind me were in their late fifties maybe early sixties. On one of our touchdowns they were hugging and fell on top of my buddy and me. We were knocked into the people in front of us. We turned around and the two of them are still in an embrace laying on our seats, wasted.
So I am going to pay a alot of money for a ticket and go to a game so drunk that I will not be able to enjoy it, or remember it? I mean, come on, grow up. You are at a college football game but you are not still in college.
One of my friends said that there was a girl in the row behind him that was passed out in her chair the whole first half.
And if you didn't hear....WE WON. 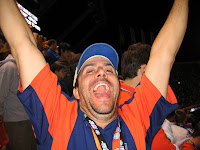 (this picture is becoming a tradition. I have one for all the big games).
So then it is fireworks, the speeches, the trophy presentation. The game ended at about midnight and we didn't leave our seats until about 12:50. Then, it was slapping people five outside the stadium and trying to find a freshly printed T-shirt.
We finally made it back to the car for a victory cigar. 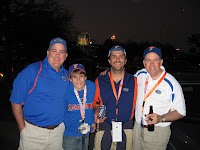 Man was it great. One last thing. Remember when I told you I was three spots from the gate at the parking lot. Well they closed this gate. So we turned out parking in the 3rd spot from the end. It took 1 hour just to get out of the parking lot.
So we get on the crowded road at 2:15am. Turns out my wife's aunt lives 35 miles south of the stadium.
One of the guys we were with had to be at work at noon.
You do the math. If everything goes well we get to her house at 3am (so you are thinking, it is going to be 3:30am) and we have to leave her house at 8 to get this guy to work.
All six of us roll into her house smelling of beer and cigars at 3:30am and then leaving at 8am.
I made the decision NOT to go to my family members house. I know she probably cleaned her house and made the beds and probably bought breakfast but....
We went north and started the trip back home.
5:30 rolls around and we are pulling up in the driveway.
I am a wreck.
I am looking and smelling so good I get to sleep in the guest room for the night (I mean morning).
I sleep until about 10:15am. I get a shower and brush my teeth (twice, with flossing and mouthwash and tongue scraping).
I came to the living room and no one was here.
So what else was there to do but to watch the game again.
And I can tell you....It was almost as good the second time.
I hope you are having a good a day as I am.
Talk to you Wednesday. I hope I can make it about teeth (less of course, the Gators win another championship in the meantime)
john
By the way, Tebow announced that he is coming back for his senior season. I hope to repeat this blog next year. The Rose Bowl...has a nice ring to it, doesn't it?