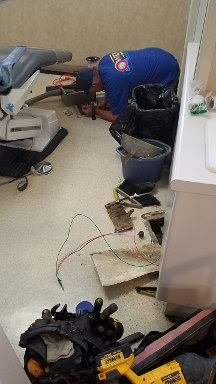 “Doctor, the radio keeps turning off!”

So began my morning. Little did I know that within the hour, an electrician, my dental equipment repair team and an electrician would be in my office. My staff also would be cancelling all of my appointments for the day.

“Why does the radio keep turning off?” I asked. No one knew.

Being a dentist and inhaling all of those chemicals over the years, my sense of smell is not the greatest. So I asked my assistant, “Do you smell anything?” She responded, “Oh yes!”

I quickly realized that we had an electrical fire. Somewhere in my office, an electrical wire was starting to burn. Where? It did not matter. My staff and I rushed to the circuit breaker box and turned off all of the switches for the operatories. We were finished for the day.

You’ve probably heard the saying, “Don’t sweat the small stuff.” Fair enough. The trick is to know when it is no longer the small stuff you are dealing with. A light bulb burns out in your private office? Small stuff. Smelling smoke each time you turn on a light switch? Not small stuff.

I learned this lesson a few years ago from a colleague. He got a call early in the morning informing him that there was a fire near his office. Within minutes, he drove up to realize that it was his entire office that was on fire. The cause? A water leak mixing with a power junction box inside his office. The total loss? His entire office.

This is not sweating the small stuff. This is knowing that things can go wrong — really, really wrong.

The electrician informed me that he would need to tear up the floor in our operatories in order to get to the wiring.

He tore up my flooring, dug a hole and located an outlet. This outlet had been buried for at least 15 years. It had given out. My electrician replaced it, and we were back in business.

If you show up to your office and something keeps switching off, you may want to take it seriously.