Hello. My name is John Gammichia, DMD, FAGD, and I am going to be joining the bloggers on The Daily Grind. It is kind of weird for me to say that, and some of you might even know who I am. I was the original blogger on The Daily Grind. I was on the AGD’s Technology Council about a decade ago. We were sitting in a room, thinking about new technologies, and we spoke of starting a blog. Next thing I knew, I was posting on this blog two to three times a week for almost four years (no, that is not a typo). That adds up to more than 1,000 posts. I decided to take a break because things were changing. I needed to be more focused at work and I have aspirations of doing some lecturing (and, oh my gosh, does this take a lot of time).

For those of you that don't know me, I am a proud 1995 grad of THE University of Florida College of Dentistry, and I practice in Orlando, Fla. I am married to my college sweetheart and have four children, ages 15, 13, 10 and 4. I have a fricking great life. My job gives me time to do other things I really like to do. I get to coach my kids in multiple sports. I have time to serve at my church. My hobbies include all Gator sports (basketball is my favorite) and running marathons. I love dentistry and have a great passion for it. That’s enough about me.

Like I said, I am trying to get a lecturing thing going. My favorite thing to talk about is posterior composites. In my journey (that sounds corny, doesn't it?), I have come across a ton of products that I don't think the masses know about. I joined a group of dentists (called Catapult) that reviews products and gets sent a bunch of info, and we have teleconferences about products and whatnot. So, between the group and what companies are coming to me with, I get to see a lot of products.

I am finding that the ins and outs of the materials are really fascinating. Research and the business of selling stuff move at the speed of light. Companies are trying to get product out and science is trying to research it, all going on behind the scenes of what we are doing every day. I subscribe to Operative Dentistry magazine (wow, this just sounds geeky) and I feel it is on the cutting edge of this. I feel like I am part of the process and it is pretty cool.

Today I want to tell you about a product that I am using that might be useful to you. I feel that talking about the nuts and bolts of dentistry is where I might find my niche in this blog. When I lecture, I find there are a number of dentists who are intrigued by the new products I mention. But these are things I have been using for years. Sometimes we get so much information from study clubs, mail-outs and magazines that we get a bit of "paralysis by analysis". We just continue to do the same thing. I’m not saying that this is all bad; if it works, you don't always have to change. Or maybe you learned so much in school and you are so busy jumping through all the hoops that the minutia of the differences are in the generations of bonding agents don’t seem relevant.

I began my posterior composite life right out of dental school. I saw a guy named Ray Bertolotti, DDS, PhD, in 1995, and he changed my life. I started doing posterior composites exclusively and was using an etch-and-rinse system (that is the new lingo for a 4th generation etch, prime and bond system). About 12 years ago, I started using a 2-step self-etching bonding system, Kuraray's Clearfil SE Bond (this would be considered a 6th generation).

I was fat and happy for a long time, but I couldn't shake my desire to etch the enamel. So it wasn't long before I went to a selective etch technique. That is, etching the enamel AND using a self etching bonding system. I did this for awhile and things were going great. I would try other things along the way, but I always went back to this.

Then another tweak that stuck for a long time was disinfecting my preps before bonding with chlorhexidine. They found that chlorhexidine disinfects and acts as an MMP inhibitor. MMPs are proteinases that are released during the etching process that have been proven to be the culprit of dentin bond breakdown over time. Chlorhexidine was found to inhibit MMPs, making the bond stronger for a longer time. There are other products that are MMP inhibitors also.

Then companies started latching on to this knowledge. Kuraray put an MMP inhibitor in the primer. Are you kidding me? The "gold standard" of self-etching primers just got better! So now they have a product that is like SE Bond on steroids. It is called Clearfil SE Protect. It has MMP inhibitors in the primer, but it also has fluoride in the bonding agent. It forms a great long-lasting bond and the dentin is being fortified by the bonding agent.

I am still selectively etching, but I get everything I want out of Clearfil SE Protect. And with this product, I can do things like this this: 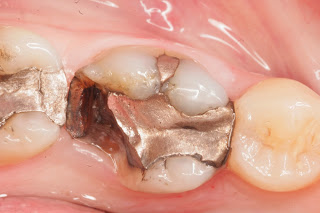 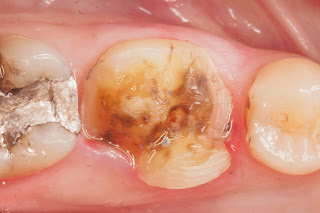 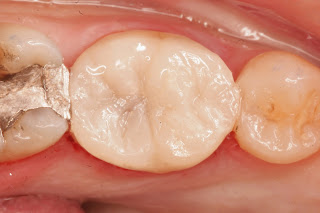 I am so glad to be back.

John Gammichia, DMD, FAGD
Posted by AGD Blogger at 9:40 AM

John. I missed you, Great to see you writing again

Nice post. I’ve been using ClearFill SE Bond since it came out and have yet to find a better agent for composites. I also selectively etch the enamel as it seems to prevent future discoloration of the margin. I am doing Cerec restorations, when the patient allows, for restorations like the one you show, but I still do a lot of the large ones in composite. I’ve recently returned to using a glycerin film during final cure which also helps prevent marginal discoloration because I’m trying to more of a sculpting placement than an overfill and trim procedure.
Terry G Box DDS MAGD

Glad you're back. Missed seeing your posts.

Great to see you back -- I have read 100% of your posts and enjoyed every one of them!