About four years ago, I decided to learn to play guitar. It was something that I’d always wanted to learn. However, life sometimes just gets in the way. By the time I went to college, followed by dental school, then started working, later bought a practice, then got married and had a daughter, well, I just never got around to it.

Finally, I decided the time was right. I would finally learn to play guitar. Ideally, I would go home after a long day at the office and practice each and every night. I think we all know how well that worked.

Then I had an idea. We all have slow times during our day. A patient may cancel or run late. Or, perhaps, you are waiting for patients to get numb. What if I took each opportunity to practice guitar? I started to think about it. At the end of an eight hour day, I would have found at least 20 minutes to practice. Imagine practicing a new skill for 20 minutes a day. You would show definite improvement after a year. 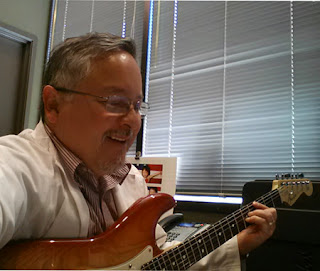 So I began practicing between patients and at slow times. You know what? I’ve gotten pretty good, if I do say so myself.

I know what you’re thinking. “Andy, you could have used that time to read that pile of old dental journals sitting on your desk.” Yes, I could have read those journals.

An unintended benefit of playing guitar at the office has been that patients are pleasantly surprised to walk in and see their dentist playing guitar. They see me as more human and with varied interests. Patients have even invited me to sit in with their bands! Additionally, it gives me something else to talk about with those patients that are musical. We discuss favorite music and playing techniques. Of course, none of these are the reasons I did it, but the benefits are fun.

So how do I practice without annoying my staff with constant repetition? I purchased an electric guitar. When it is not plugged in, the staff cannot hear me play in my private office. I do, however, keep an amplifier at the office; if I get in early I’ll plug in and play loud. Really loud. Because I can’t’ do that at home.

I invite you to learn a new skill in between patients. Dream big. What have you always wanted to learn to do?

Now if you’ll excuse me… I was going to read some journals, but instead I want to go climb a “Stairway to Heaven.”

Andy Alas, DDS
Posted by AGD Blogger at 9:31 AM

That is great to hear of another closet rock-n-roller! I have a small (small does NOT equal quiet) practice amp in my office that I use to doodle on my guitar or bass. Usually fire up a video on youtube and jam along. Hate it when they bring a patient back and I'm in there banging my head!!
Rock on!!