As a college student in New York City, celebrity sightings were practically an everyday occurrence. Having your morning route blocked off by a camera crew or being forced to wait until a director got a satisfactory shot of an Olsen twin strolling across campus was a perfectly valid reason for being late to class. It was totally normal to share a subway car with late night hosts, TV stars, and popular musicians. One time, in order to drop off an assignment before my TA’s deadline, I begged a production assistant to grant me access to a building that had been closed off for filming and wound up getting to watch the entire cast of “Mona Lisa Smile” file out of the classroom where I attended lecture twice a week.

Although I was fully cognizant that celebrities are just plain human at the end of the day, I guess I never gave too much thought to the idea that they, too, have to go to the dentist. Not that there’s been any shortage of reminders. In school, our first esthetics lecture contained headshots of famous actors and actresses whose dental work we would later analyze ad nauseum, discussing all the things we would have done differently and what improvements we’d make to them if given the chance. (I’m looking at you, Tom Cruise.)

These days, when a celebrity goes for a checkup, it’s not uncommon to have the mundane minutiae of the visit documented on a camera phone and then shared with millions of people online. I even received a text message alert when one of the Kardashians left her most recent dental appointment and was reportedly—brace yourself—STILL feeling numb. Why her dentist’s ability to achieve profound local anesthesia was considered breaking news is beyond me.

Yet, for someone who loves pop culture as much as I do, the concept of having a famous person in my office, let alone my dental chair, had never crossed my mind. In my universe, dentistry and celebrity were two totally separate entities whose intersection I had not ever considered. Sure, I’ve marveled at how Kate Beckinsale manages to keep her skin so youthful and radiant, but wondering what teeth whitening products she uses and whether she’s got smooth or stippled gingiva doesn’t keep me up at night.

I suppose that I should have expected to come into contact with some celebrity patients eventually after moving to southern California, where the rich and famous come to work and play. Shortly after joining my current practice, I was slowly introduced to some of our more high-profile clientele. I had the opportunity to meet a local news anchor and some professional athletes whom I’d probably be more excited about if I followed any sports at all. And although San Diego doesn’t see nearly as much celebrity activity as New York or Los Angeles, I’ve come across plenty of Californians willing to shell out big bucks for a Hollywood smile.

A few weeks ago, I got to see and experience what having a bona fide celebrity in the office is like when Michelle Phan came in for her appointment. For those who may not be aware, Michelle is a former waitress turned YouTube sensation turned beauty products mogul who has successfully parlayed her passion for cosmetics into a burgeoning makeup empire. She now has millions of loyal fans around the globe who follow and celebrate her every move through countless social media outlets. In other words—as we say in San Diego—she’s kind of a big deal. People know her.

As someone whose formal instruction in the application of lip gloss started and ended two decades ago in the girl’s bathroom at West Brook Middle School, I was not at all familiar with her career or her celebrity status when I first joined the practice. In preparation for her arrival, I typed her name into an online search engine; within seconds, I found results that even the NSA might deem excessively intrusive.

On the day of her appointment, the sight of THE Michelle Phan standing in our reception area was equal parts startling and surreal. No matter how many times I’ve stumbled across famous people, seeing them in the flesh is something I have yet to grow fully accustomed to. When you’ve witnessed their lives play out on television and all over the Internet, it almost doesn’t seem real that they’re right there in front of you, and even more unreal that they’ve come for dental treatment. I mean, I’ve never seen a Minotaur before, but if one was waiting for me in my operatory, I’d probably be just as surprised to see it and just as disoriented by its presence.

Just to be clear, I am in no way implying that Michelle Phan bears any resemblance to a Minotaur.

But once the initial oh-my-gosh-she’s-just-as-pretty-in-person-as-she-is-on-TV shock wore off, it was back to business as usual. There really was no difference in how she was being received in our office compared to any of our other patients. The front desk greeted her just as warmly as the patient whose appointment was right before hers. Our assistants made the same efforts that they make with every patient we see to ensure that she was as comfortable as possible throughout her stay. We treated her the same way we treat all of our clients: like members of our family.

Perhaps that’s the secret to keeping everybody on our patient roster happy. Treat every person like a star, and every star like family. While it may never be the official slogan of our office, I hope that every patient in our care understands that that’s what we’re striving for.

Before she left, Michelle graciously posed for pictures with our staff and even recorded a video testimonial to share her thoughts on being seen in our office (spoiler alert: she’ll be back). I’ll admit, I’ve always thought it was kind of cheesy when I saw dentists plastering photos of famous people all over their offices and websites to market themselves as a “Celebrity Doctor,” as if evidence of treating a star is supposed to be indicative of a higher level of skill or credibility. Then again, I suppose it wouldn’t matter all that much to me if a patient came to my office and specifically requested to be put in my care just because I had a history of treating well-known public figures. 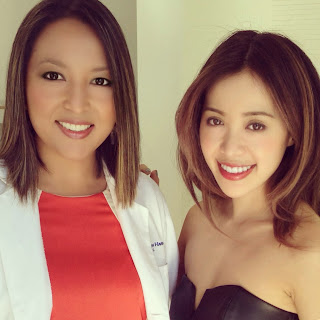 What I’ve come to realize is that the most successful doctors are the ones who can provide their patients with such remarkable service that they’re eager to come back and willing to go out and tell the world what a great experience they’ve had. The highest compliment my patients can give me is the referral of their friends and family. I know that if I never see another famous person’s name on the schedule again, it won’t be a reflection of my abilities as a clinician or businesswoman. What I really hope to see are the same familiar names and happy, smiling faces returning again and again because they trust me to provide them with the best dentistry I can.