Friday.....yes.
Noah, my five-year-old, is not happy. It was past his bedtime and he was grouchy.
We got home late from watching our school's district volleyball game, and we all jumped in the shower. Well he wanted to go to bed. So I forced him in the shower.
And he starts with, "I don't like parents."
I said, "Really, how would you get along without parents?"
He said, "I don't need parents."
"Well, Noah," I inquired. "How will you eat?"
He says, "In my bank I have $14."
"Noah, what are you going to do when those $14 run out?"
Then he says, "I can make money." Now he is saying all this with this scowl on his face.
How?
"I can do my chores. I can fold my laundry. I get money for sleeping (I give him a $1 if he sleeps past 7 am and $2 if he sleeps past 8 am. You would to if your 5-year-old kept waking you up at 6 am on a Sunday morning). And I can help around the house."
"Noah, who is going to pay you for doing your chores?"
Silence.
Then a big smile comes across his face. The smile that says, "Oh, you got me."
I tell him how much I love him and need him in my life.
Okay a funny story that will lead very nicely into today's topic.
Andre Agassi.
Let me do a little background information. Andre became a professional tennis player at the age of 16 (he is 39 years old).
He has wo 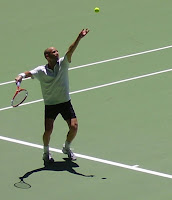 The weather here has been PERFECT. About 60 as a low and about 80 as a high. Real nice.

Remember your last entry....about the meal ticket. Agassi is the same idea...his dad taped ping pong paddles to his hands when he was a baby. Just saying...there are 2 sides to this story....

All he is doing now is seeking more glory in a different way. He just wants to be in the spotlight again since he is no longer relavant to tennis now. IF HE TRULY HATED TENNIS HE COULD HAVE STOPPED anytime after he was 18 years old. Nobody made him do it. And as Safin said give all the trophies and money back if you truly feel that way.